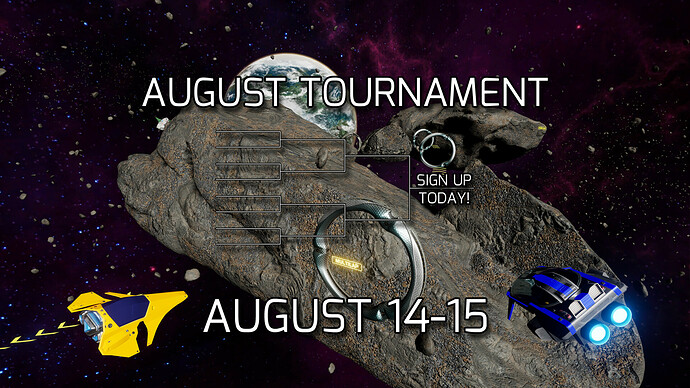 CPR August Tourney Announce1920×1080 711 KB
Signups are now open for the race August 14-15!
Sign up now for this month’s race, and compete against the hottest racers for the coolest prizes.

For beings just joining us, let’s go over the rules:

What good is a contest without prizes?

Well, here’s what you’re competing for!

Current Standings
This will be updated regularly! In order to enter the bracketed tourney, racers must have a top 8 time on track 16! 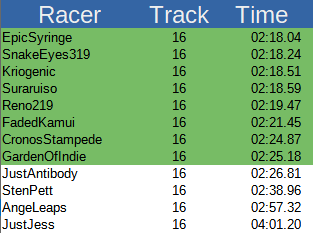 Remember to vote now for your favorite tracks!
This month, the most popular track will again become the qualifier!

Choose your 4 favorite tracks for the tournament: 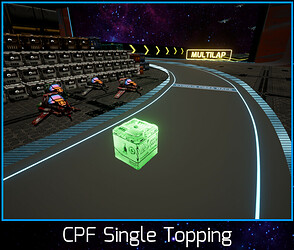 Level 2 , Solaxis Track 1. This is a winding track through the sunny sands with a few popups and curves: 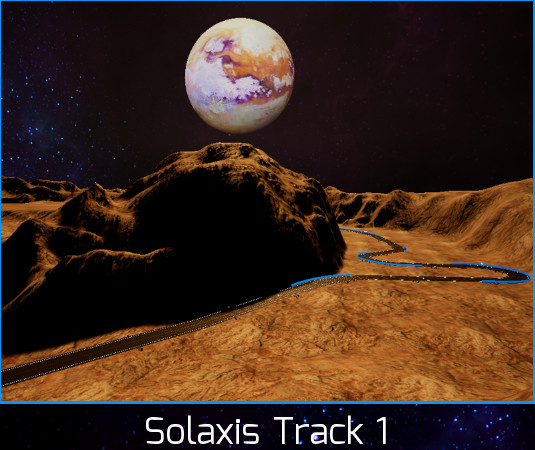 Level 3 , Klaatu Omega Track 1. The harsh light of the gas giant casts a blue light on this winding and technical track: 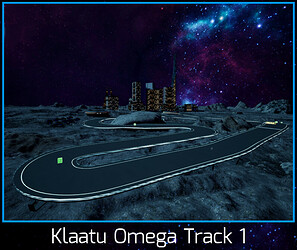 Level 4 , CPF Mega with Everything. A super tight track inside the hangar bay of a ship of the mammoth pizza delivery fleet: 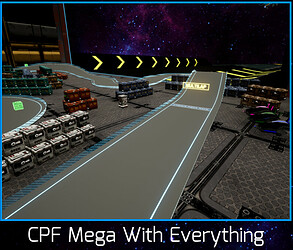 Level 5 , Solaxis Track 2. Back to Solaxis for a race across red sands with long straightaways for very high speeds and a few tight turns to keep you on your toes: 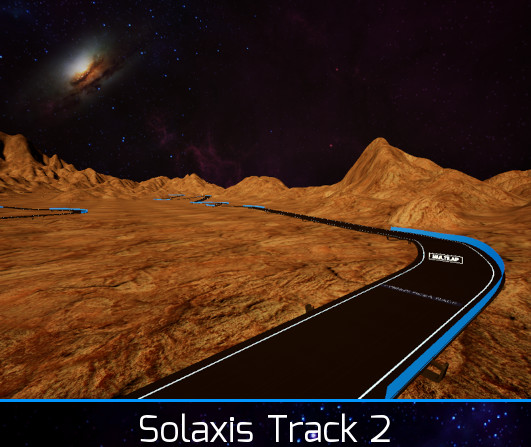 Level 6 , Solaxis Track 3. Winding, complicated curves interspersed with breakneak straightaways make a track where one mistake can make or break your race: 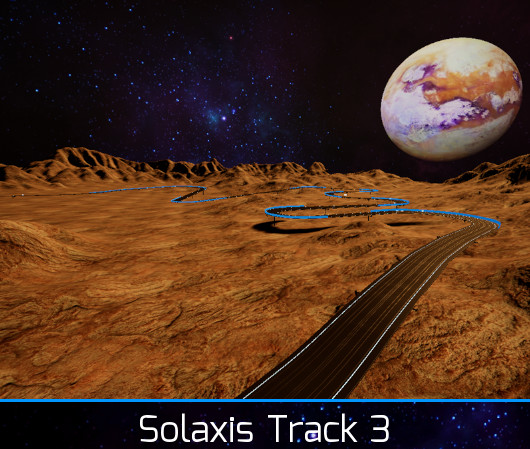 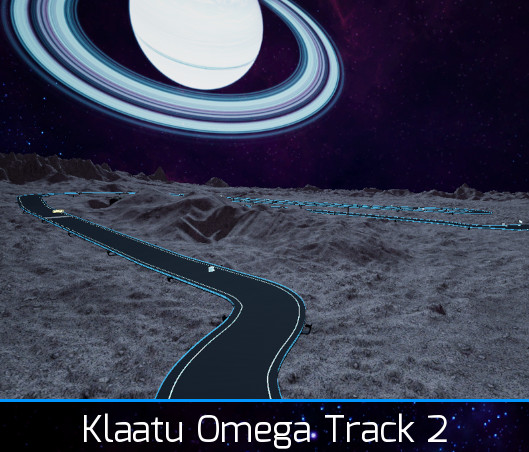 Level 8 , Solaxis Track 4. The lead you build in the corkscrew can be lost in a moment on the tight switchback climb to the summit: 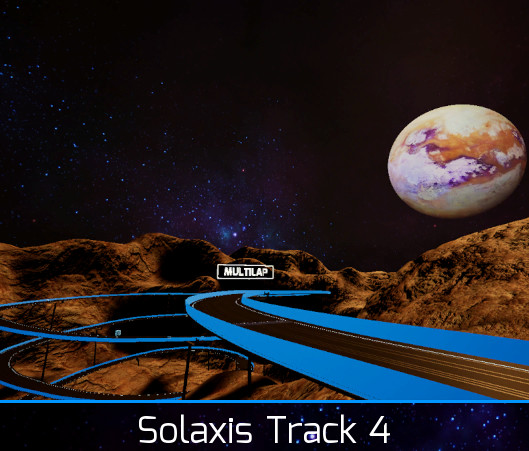 Level 9 , the Mathesar Belt. Dodging asteroids and attempting to collect toppings in the cockpit of the fastest ship in the Cygnus Pizza Delivery Fleet is a huge challenge, and a moment’s lapse can result in a humiliating 50 point run: 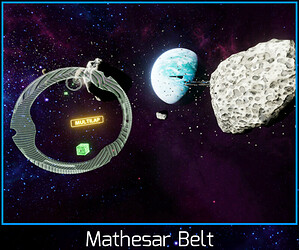 Level 10 , the dreaded Proteinosphere. Designed as a test track for handling and performance, this track barely clings to the surface of an asteroid and requires absolute concentration and mastery to cross the line with even one topping: 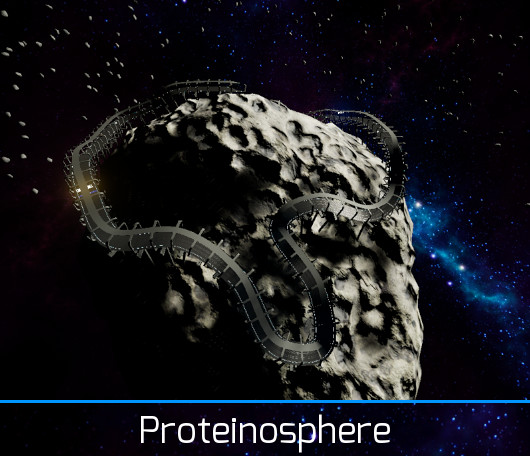 Level 11 , Polaris Track 1. The first exciting track of Season 2, this is a high-speed dash through a snowy landscape with a few light curves and one extreme hairpin where races are won or lost: 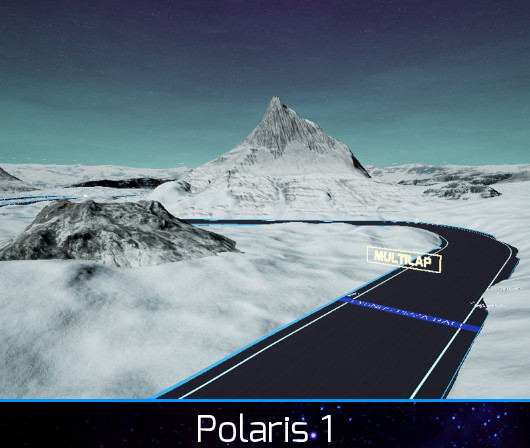 Level 12, Polaris Track 2. The qualifying track for the April tournament and the second track of Season 2, this arcade-inspired track has a shortcut, a jump, and some pretty rough surprises in store for the unwary! Proceed with caution and all speed! 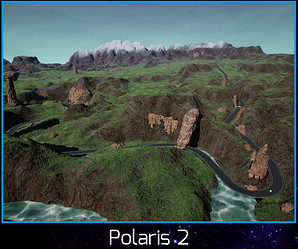 Level 13, Vulcan. The final track of the April tourney, this race track is all about timing and awareness. Racing on a live volcano on a newly formed planet is too hot for most! 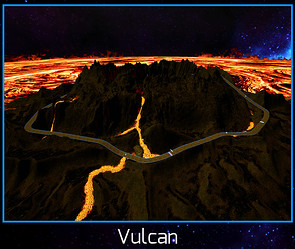 Level 14, Luminos Station. This track on the beautiful but very popular luxury station orbiting the beautiful vacation planet Luminos, in the stunning Vita System is a bit congested with traffic. 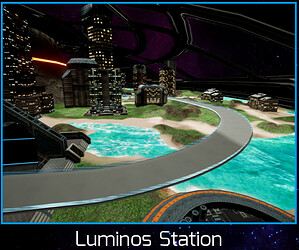 Level 15 Luminos Track 1. Luminos, Jewel of the Vita System has a fantastic track with some great sights, but it seems that the hatch has been left off the maintenance tunnel. 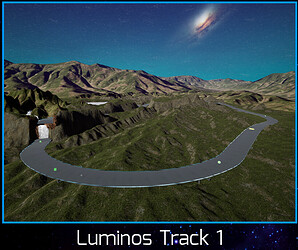 Level 16 Giordano. Giordano is the luxury low-G vacation destination and fun spa known for its junior pizza race track and the wild low gravity hijinks that people love to engage in. If you venture into the huge parking garage, remember where you parked! 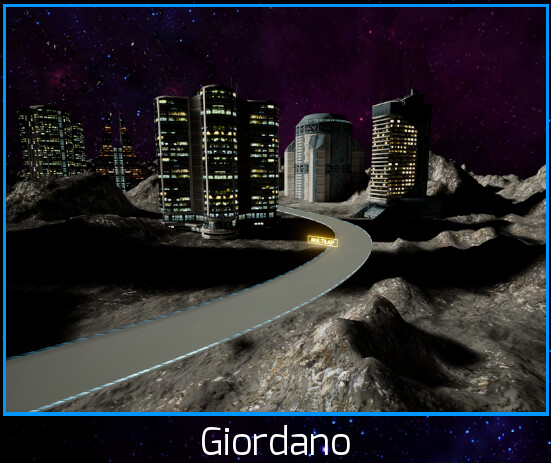 I’m in! Let’s do this crazy thing!

Five of the final eight MCs fill out the Cygnus Pizza Corp’s Winner’s Circle in July:

HourADayGamer has retired to the wealth and prestige of the intergalactic sports commentator circuit after his two back-to-back wins. He’ll be back for the Tournament of Champions, but don’t worry, I’m sure he will post his insight (and track times) to inspire the other racers this month. As a retired champion, he was in a position to help refine the track and help us prepare it for the big event.
Catch his streams on twitch!

Indiana Crohns, the man who doesn’t know the meaning of the word quit. He took the tracks by storm in the April tourney, with a fiery win on track 13. He will be back to claim the ultimate prize in the Tournament of Champions - but don’t worry, he will also share his encouragement, critiques, and phenomenal track times with this month’s racers!
Come hang out and see his amazing plague doctor masks on Twitch

Purple Thiccmin is an indie variety streamer and speedrunner with a penchant for precision and a hunger for victory that was barely appeased when he planted @GardenOfIndie on May’s Track 14. Sure to have plenty of tips for fellow racers this month!
Catch his speed running skills on Twitch

Cardboard Tier is a dog-loving beard enthusiast with huge streaming skills and excellent race form. He put in great times every month finally climbing to victory on June’s fast and furious Track 15. He has at last proved to everyone that when it comes to racing, his tier is Epic.
Check him out on Twitch!

Commodore L1L F3LL4 is part wyvern, part man, part myth, and all speed. Tireless in his promotion of his fellow indies, he and his wife form an amazing team chasing the ultimate glory: the Cygnus Pizza hat. After an amazing victory in July where he wasn’t satisfied with winning just 3 races out of 5, but wanted to win the whole pie, he’s here now to help encourage the future champs.

Time to meet the racers! As veteran racers opt in, we’ll update with their info.

Reno219 is a variety streamer with a love of Smite - and Pizza! Don’t let his quiet persona fool you, under that relaxed attitude lies a need for speed and the heart of a champion. Reno219 is out for Pizza… and won’t let anyone stand in his way.
Check out his streams on Twitch and don’t forget to say hi!

Supherbyus runs a great indie stream with a big mix of styles, but don’t mistake his taking it easy for complacency… the last person who did that is still stuck behind a sabotage on track 10! Supherbyus is here to drink coffee and win pizza, and he’s brought two coffees.
Catch his awesome VoxPop and Indie streams on Twitch

Chaoticfear19 is a passionate reviewer and indie game player often seen on the better twitch streams, or leaving well-thought-out reviews. His calm demeanor hides a ravenous competitor who will stop at nothing to decimate detractors and reach the pinnacle of pizza perfection.
Check out his great reviews on Youtube

GardenOfIndie is no stranger to intense racing! After dismissing the famed Proteinosphere as too easy and obliterating some of Season 1’s best tracks, he decided that it was time for a real challenge. Armed only with precision and a feline chewbacca, he’s going all the way. Only three people have a gold trophy on the dreaded track 10, and two of them are in the Winner’s Circle. Is there anything else these racers will have in common soon?
Check out his late night stream on Twitch

SnakeEyes319 is part ninja, part indie streamer, and part Racer X. He’s coming to this tourney to chew gum and deliver pizzas… and he’s all out of gum.
Catch his great streams on Twitch!

Suraruiso Gaming is fast, furious, and driven - on the track. Off track he’s a chill dude who just wants to play games and support his fellow vets and indies. After being sidelined in July, he’s back with a vengeance. Nothing will stop him from channeling the true power of the sloth to unlock the furious interdimensional speed available only to those who take their time.
Catch up with him on Twitch!

Cronos Stampede is nothing if not a fighter, and he’ll be bringing his fighting spirit, indomitable flair, and quite possibly his beach wear back this month in his pursuit for delivery domination. He’s a loud voice for equality, and will be happy to leave everyone equally in his wake as he races to victory. And a cunning hat.
Catch his awesome streams on twitch!

Just Antibody is a relaxed and mellow streamer known for his love of Across the Obelisk and his bionic arm. Some say he’s really just three @IndianaCrohns in a trenchcoat, and that he knows two facts about ducks and they’re both wrong.
All we know is… he’s not the Stig (but he might be the Stig’s streamer cousin!)
Watch his great streams on Twitch .

Sten Pett is a racer with a passion for precision and a dynamic daredevil who will stop at nothing to accomplish his twin goals in life: total pizza domination, and making it run on Linux. An avid obsolete software collector and metal enthusiast, he is entirely in it for the hat.
You could follow Sten on Twitch!

Now for the rookie racers! Welcome to best pizza race competition we can make!

Commodore FadedKamui is a huge supporter of indie games and a great streamer who streams on Glimesh. He has proclaimed his intent to dominate the tournament so be prepared for him to leave all of his great manners and niceness by the wayside - that’s just extra mass when he’s coming for the Pizza!

Watch his streams over on Glimesh and be prepared for a chill time.

EpicSyringe said it best in his bio:
“I’m a variety streamer with an emphasis on bodying bosses. And this month, I’ll be bodying the bosses of CPR. I heard they were tough, but I’m epicness incarnate. And nothing gets the better of me. You best be prepared Cyprus, the absolute legend has arrived!”

Follow him on Twitch to see the legend unfold!

AngeLeaps is a twitch streamer fast on the way to affiliate. Playing games, taking names, and kicking butts, they are new to the game but ready to put it all on the line for the ultimate prize…

Watch AngeLeaps on Twitch and support the push to affiliate!

What’s up! My name’s Syringe and I’m a variety streamer with an emphasis on bodying bosses. And this month, I’ll be bodying the bosses of CPR. I heard they were tough, but I’m epicness incarnate. And nothing gets the better of me. You best be prepared Cyprus, the absolute legend has arrived!

Great bio! Welcome to the best pizza racing game we ever made!

I’m still trying to figure out Discourse so sorry if it was mentioned, but what time of day are these races going to be taking place? I just have to make sure I’m not working when they’re going on xD

That’s a great question - you can actually race any time you like after the 12th (when the track voting is done), then you just post pics.
The only time requirements are that the final screenshots/times for the Qualifier must be in Saturday by 10am eastern for the brackets - and the final screenshots/times for all races must be in by Sunday at 10am eastern.

The the final race is head to head on Sunday, at a time determined by the winners.

Thank you so much! That’s epic-ly awesome! I think it said I can sign up by writing in the replies here, so consider this my formal proclamation of CPR domination.

Welcome to the races then, Commodore! 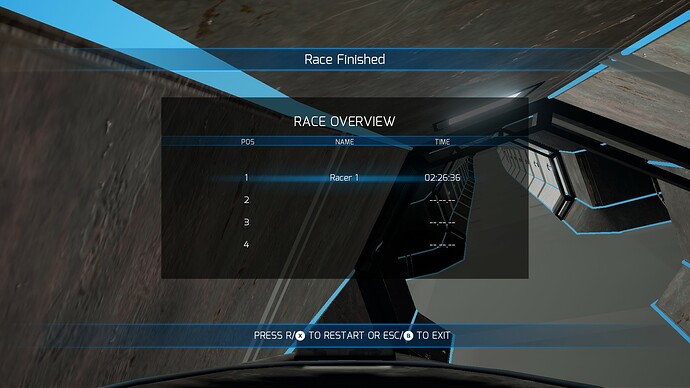 Awesome, lets do this. I’m in.

Welcome to the tourney @Kriogenic!

Welcome back to the races! I’ll add your bio